By Paul B. Kidd

Detectives from Chatswood police station confirmed Glover's name with his employers, rang him at home and asked him to drop in for a chat about the assault at 5pm the following day. When Glover hadn't turned up by 6pm, police called his home where his wife told them that he had attempted suicide and was in Royal North Shore Hospital. 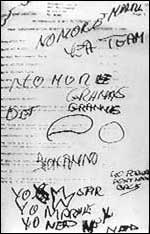 Police went to the hospital but Glover was too sick to be interviewed. Staff handed police a suicide note that included the words "no more grannies, grannies."

And still it didn't register to the constables that the middle-aged portly man with the grey hair, who was recovering from attempted suicide after assaulting an elderly patient in a nursing home, may be able to help them with their enquiries.

The police returned to interview Glover on January 18 and, with his reluctant approval picked up a polaroid photo of him to show to Sister Davis and Mrs Roberts. After the positive identification, one of the officers told Davis and Roberts: "We know who it is. We know all about him."

Incredibly, another two weeks would pass before the suicide note and the photo wound up on Mike Hagan's desk. As soon as he saw them, he knew he had his man. Proving it was a different story.

Head of the detectives in the task force, Detective Sergeant Dennis O'Toole said: "We still had no evidence. If he had said to us, "I don't want to talk, we couldn't have proved any of the murders".

Still, the photo matched the many descriptions of the mysterious greyhaired, middle-aged man and in his job as a sales representative Glover could have been at any of the murder scenes.

Detectives interviewed Glover. He denied anything to do with the alleged assault on the elderly woman at the nursing home. Police gave him the impression that they were satisfied and left him feeling confident that his luck still held. But John Wayne Glover was under around-the-clock surveillance with six detectives assigned to follow him and find out every conceivable thing about him.

Even at this stage the police didn't have a scrap of evidence that would stand up in court, but in their minds there was no question that Glover was their man.

Hagan had to make an agonising choice. Go in now and let the Granny Killer know that they were onto him and take the odds of not finding any solid evidence that would hold up in court? Or sit tight, wait for him to stalk another old woman and catch him in the act? Hagan opted for the latter. Sadly, it was a decision that would cost another life.

The police didn't let him out of their sight, but Glover didn't put a foot wrong. He occasionally stopped to look at old women but his behaviour was exemplary.

On March 19 Glover called at the home of a lady friend, Joan Sinclair, at 10am. He spruced himself up in the rear-vision mirror before he was let in at the front door. Observing police had no reason to believe that it was anything other than a social visit. Besides, the killer had only ever struck in the afternoon and only with elderly women. Still, they watched every corner of thehouse.

At 1pm, there was no sign of Glover or any sign of life from the house. The police surveillance became concerned. At 5pm, all was still quiet and at 6pm, deciding that all was not well, they got the okay from Hagan to go in.

Men of Black Gold
These guys bust their butts drilling for Texas oil.
Get to Know Them »

Most Reckless Star
Mariah, Britney, Snoop — or someone even crazier?
Cast Your Vote »

Guns, Gems and Steal
Our list of the 10 most spectacular heists ever.
Check it Out »